In our previous article we looked at the origins of modern deep soaking tubs and how, in 1991, a single design idea from Cabuchon set in motion a style of bathing and interior design that now spans the globe. Here, we consider how that trend developed.

By 1997, Cabuchon was firmly established as the world’s foremost pioneer of modern deep soaking tubs and its success with the Imersa and the Nirvana began to attract real attention. Shipped to five continents, the baths were in great demand for their comfort and practicality.

Inevitably, the range also began to spawn some imitators; competitors generally sold simple square containers with similar external dimensions but, without the benefit of advanced heat-retaining materials like FICORE® and lacking the research that had made Cabuchon’s tubs so comfortable, they were never destined to do well.

In an effort to cement its leading position, Cabuchon set about adding newer models to the range – soaking tubs that would offer added choice and design features to suit particular lifestyles and interiors.

As part of its design brief, the company identified two important market trends – a growing interest in Minimalist design, and a rising interest in baths that saved space. When monitoring sales of the Nirvana and the Imersa, Cabuchon saw that almost as many customers were choosing them for their space-saving characteristics as for the ability to enjoy deep soaking. Indeed, more than half of all its deep soaking baths were installed with overhead or wall-mounted showers.

Cabuchon’s response was the Calyx Minimalist-style deep soaking tub, which it created in two sizes. The Minimalist design meant there were no foot or arm rests, and no ‘armchair seat’ either so, in some respects, the two Calyx models represented a return to a purer form of the original ofuro design. These changes, together with narrower rims and the abandonment of decorative deck space, delivered 30% more bowl space for bathing and showering when compared to the Imersa. 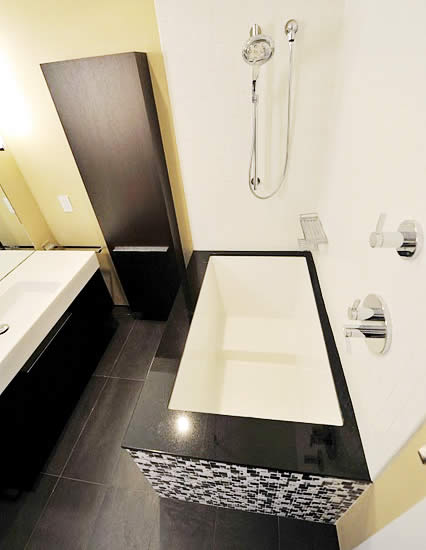 A further refinement was to reduce the bath’s height slightly – to make entering the bath easier without a step – but, simultaneously, to lower the height of the seat so that bathers could still enjoy exactly the same depth of water. Two versions of the Calyx were launched in 2008 – the first customer being a boutique hotel, which installed 56 of them in its various rooms.

In the same year, Cabuchon launched the Xanadu two-seater deep soaking tub – the first of its kind in the industry. Again, it was designed by Alan Gorst and it represented the culmination of six years of research and development by him and Cabuchon staff, as well as field trials and hundreds of discussions with existing and prospective customers.

The Xanadu was very much a response to repeated customer requests for a two-person deep soaking bath but, as a manufacturer, Cabuchon had to address an ambiguity, which was how the two seats ought to be configured. Some clients clearly envisaged seats at opposing ends, whereas others wanted a bath that would allow side-by-side bathing. Some wanted both and others wished to alternate. The company therefore decided that rather than disappoint any customers, it would create a bath that would meet all these objectives – one that would be wide enough for two to sit shoulder to shoulder but which would have seats at either end to give the option of bathing face to face. 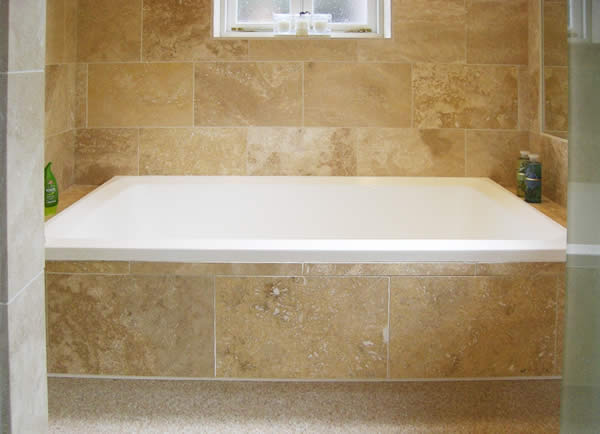 The Xanadu was also designed to afford plenty of floor space between the seats to enable safe and comfortable showering.

The result of all this development work is a range of four, highly regarded deep soaking tubs that now set the gold standard for the international market.

Today, many manufacturers have copied key aspects of Cabuchon’s deep soaking baths – the integrated seats, the sculpted interiors and other important developments. However, in general, the use of inferior materials such as cheap plastics and laminar composites has meant that few competitors have even begun to approach the build quality of Cabuchon’s range. Moreover, since many have evidently been created without the foundation of extensive prototyping and rigorous testing, they often prove uncomfortable and are insufficiently strong or rigid to accommodate an effective hydrotherapy system.

Unfortunately, there is a risk associated with the rapid influx of cheap, hastily designed products from manufacturers who are keen to cash in on a burgeoning trend. Just as a raft of cheap whirlpool baths has tended to undermine the reputation of genuinely effective hydrotherapy systems, so it is possible that a rising tide of inferior quality ofuro-style baths will erode customer confidence in deep soaking tubs.

Many different factors determine the effectiveness of a bath: the fundamental design, the research that underpins it, the choice of materials and the quality of the craftsmanship all play a significant part. Those who cut corners in any of these respects are unlikely to create anything that delivers lasting value. By contrast, Cabuchon deep soaking tubs come with a 25 year guarantee and, where an optional hydrotherapy system is chosen, all piping and the system’s joints carry a unique ‘buyer’s lifetime’ guarantee.

Despite growing competition, Cabuchon remains convinced that quality is the key. While competitors strive to imitate, Cabuchon continues to lead the development of new space-saving baths. Indeed, the latest in this evolving line of luxury soaking tubs is the Yasahiro, launched in 2015.