The popularity of deep soaking tubs has been rising steadily in recent years, but 2015 in particular has seen a tectonic shift in demand. Reams of magazine articles are now extolling their virtues, interior designers are using them in ever-growing numbers and manufacturers are responding by launching a raft of new models. However, whilst designers, producers and the media are now according it greater attention than ever before, the concept is far from new.

Tubs that allow deep soaking up to the chest and neck were first developed centuries ago in Japan where, over the generations, they became the centrepiece of a traditional bathing ritual. The ofuro provided an oasis of calm and introspection – an important element of civilised life.

In the West, deep soaking tubs went largely unregarded until 1991, when Cabuchon developed the first in a series of ofuro-inspired baths for modern families. Made from FICORE® – the company’s own high performance composite – this pioneering range showed the market that there was a better, more comfortable way of bathing. With compact dimensions but a far greater depth than anything that had preceded it, Cabuchon’s deep soaking tub range changed bathing habits forever.

The design of this first modern deep soaking bath was created by Cumbrian product designer Jeffrey Harrison, the company’s founder and, at that time, managing director. He recognised that most bathtubs of the time were essentially copies of the traditional ‘horse-trough’ shaped cast iron bath. They were accepted simply because they were regarded as traditional, but comfort was not really a consideration.

By contrast, the deep soaking tub offered both comfort and pleasure, plus the added benefit of saving a considerable amount of floor space. In many modern homes, hotels and city apartments, bathrooms were becoming smaller so there were distinct advantages to a bath that made better use of the available space.

Having produced a series of designs, Harrison set about creating 3D prototypes and it quickly became apparent from physical trials that the traditional form of the ofuro – square-sided and without a slope or seat – really didn’t suit Western tastes. Bathers in Europe, America and many other parts of the developed world generally much preferred to sit with their feet lower than the rest of their body, and they found a sloped, gently-contoured backrest much more conducive to relaxation.

On the basis of further prototype trials, Cabuchon eventually developed the Imersa deep soaking tub – the first modern ofuro. Fitted with grab rails as an aid to entry and egress, it became an immediate success as customers warmed to its unusual shape, its outstanding comfort and its ability to save both space and water.

An early photo of the Imersa deep soaking tub.

Deep soaking tubs – the next generations:

The Imersa was launched in 1992 and quickly grew in popularity although, at the time, it attracted few imitators. Deep soaking, it seemed, was still very much a minority passion. Nevertheless, in 1996, interest was more than enough for Cabuchon to justify developing a new generation of extra deep soaking baths. Accordingly, a little while after the death of its founder, the company asked another of its bath designers, Alan Gorst, to develop a second design.

This time, instead of starting from first principles, Gorst and Cabuchon staff talked with existing Imersa customers to learn what they loved about deep soaking and, more importantly, whether they felt there was a need for added features. The question, in short, was ‘how can we turn excellence into perfection?’

The result was the Nirvana – a name which was deliberately chosen to signify that, through rebirth (redesign), Cabuchon deep soaking tubs could deliver the ultimate in bathing pleasure.

The bath’s key distinguishing characteristics were rims free from grab bars (which were rendered unnecessary with the inclusion of the internal armrests) and a seat and back slope that were sculpted both horizontally and vertically. Designed to enhance comfort still further, this allowed the bather to adjust his or her posture according to height, build and personal preference. Finally, foot rests were added and the internal bowl size was increased. 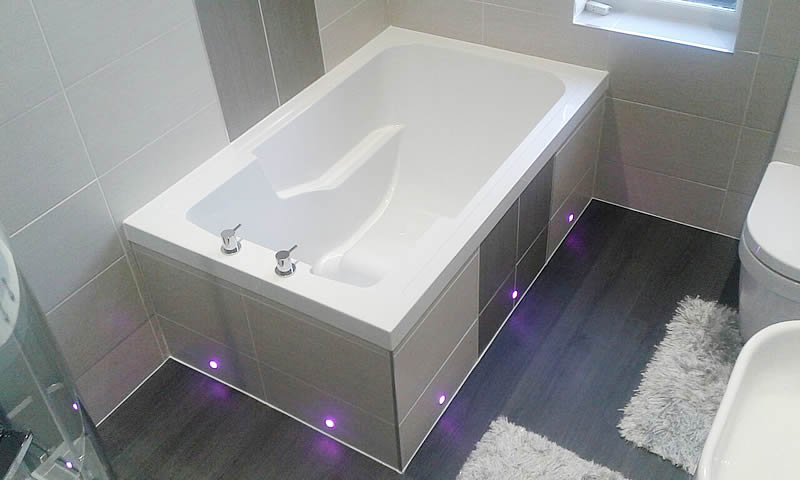 The Nirvana deep soaking tub, built in one ample size that would suit all bathers, was introduced in 1997. It sat in the Cabuchon range beside the two sizes of the Imersa and all three bathtubs sold worldwide. The Nirvana was a pronounced success and the experience of bathing was often likened to sitting in a comfortable armchair, while up to the neck in water.

With these two models, Cabuchon initiated the modern trend for deep soaking – a fashion that has since extended throughout Europe and America, and to further flung destinations such as Australia and New Zealand. Indeed, such has been the success of these modern ofuros that Cabuchon baths are regularly sold in the Far East – to countries including Japan.

In part two of this article, we’ll explore the further development of Cabuchon’s trend-setting range of deep soaking tubs, and how the modern market has changed.