In our previous post, we looked at more recent refinements to the modern soaking tub and how Cabuchon led the way in creating what has now become a worldwide passion for deep soaking. In an effort not to overcomplicate the story, we mentioned the subject of hydrotherapy only very briefly but, in reality, the evolution of the two technologies always went hand in hand. In this article, we consider the relationship between deep soaking baths and hydrotherapy systems, and how each has shaped the other.

As far back as the early 1990s, when we launched the ofuro-inspired Imersa, the perfect synergy between hydrotherapy and the modern deep soaking bath was evident. The tub’s integrated seat and the supported posture adopted by the bather made it instantly more comfortable than traditional bath designs, but Cabuchon saw that comfort and relaxation could be enhanced still further by the inclusion of a hydrotherapy system. 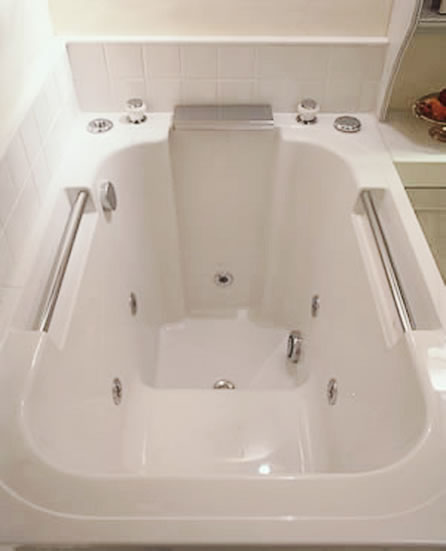 An older photo showing the interior of the Imersa – Cabuchon’s first deep soaking bath. Here, it is shown with an early version of a hydrotherapy system. Note that hydrotherapy jets have become considerably smaller since this was taken – as the following photographs show.

Hydrotherapy entails using jets of water (mixed with air to give impact and direction) which massage specific muscle groups and transfer heat more effectively by breaking up the layer of still water that clings to the bather’s body. Independent tests have proven that, when properly targeted and controlled, hydrotherapy delivers measurable benefits in terms of improved blood flow, faster recovery after soft tissue injury and the alleviation of physical and mental stress.

These effects can be achieved in almost any high quality bath, provided that the hydrotherapy system is properly designed and the placement of the jets is tailored to the needs of the individual. (For more details, please see our guide to choosing the right hydrotherapy bath or download our PDF Guide to Choosing a Hydrotherapy Bath.)

Importantly, however, the benefits are all heightened when combined with a deep soaking bath.

Partly, this is a consequence of the size and configuration of the deep soaking bath. Generally, it will be small and compact. This minimises the distance between the jets and the appropriate muscle groups, so they can deliver their toning action efficiently, effectively and with great precision. These are ideal conditions for a hydrotherapy system to deliver the maximum therapeutic effect.

A Nirvana deep soaking bath, pictured with a hydrotherapy system.

Partly, too, the bather’s posture contributes to an enhanced bathing experience. In a long ‘trough-like’ bath, the body is essentially supine, although the head, neck and shoulders will obviously angle upwards at the end. Many good quality baths of this type will have carefully sculpted backrests that make them pleasantly comfortable but in a deep soaking bath, the bather sits. A seated posture is not only very natural and comfortable, it also makes it much easier to design a hydrotherapy system with carefully placed jets that target discrete groups of tissues. In such a bath, the bather’s back and neck support little or no weight and can remain wholly relaxed while the water jets work on the soft tissues to either side of the spine. Meanwhile, the legs lie out in front, bent and with ample room, and they too can be held in a very natural, relaxed posture.

Low-profile hydrotherapy jets set into a pattern that is custom-designed to target the bather’s upper and lower back and lower neck muscles.

From the earliest times, it was apparent that hydrotherapy made a natural companion to the deep soaking bath. Recognising this, Cabuchon looked for opportunities to improve both technologies and quickly found that enhancements in one led to refinements in the other.

This parallel was perhaps most notable during the development of the Nirvana, to which the company devoted years of research, speaking with existing customers in an effort to find ways of perfecting the deep soaking tub experience. Size, posture, jet placement, controllability and many other factors influenced the design team’s direction and, consequently, the technologies developed in tandem. At the same time, there came a growing recognition that the sum of the two parts was invariably greater than the whole; in short, this was not merely a combination of the two technologies but an evolution.

A good example of this convergent design process was the development of mini-jets. We made considerable efforts to design, prototype and perfect smaller hydrotherapy jets because we saw a need to achieve two separate but compatible aims. Firstly, we wanted to optimise the pressure on any given target muscle group and, secondly, we wanted to be able to increase the total number of jets that could operate in a given space. In deep soaking baths, the proximity between body and water jet afforded the perfect opportunity to create a hydrotherapy system of outstanding therapeutic value and the mini-jets made it possible to do much more, yet in a smaller space.

Another consideration was water volume and the ability to maintain temperature. The smaller dimensions of a deep soaking bath, coupled with the inclusion of an integrated seat means that baths such as the Imersa, Calyx and Nirvana require much less water to fill than conventional baths. Crucially, however, the surface area (i.e. the water surface, through which heat is lost to the air) is proportionately much smaller. As a result, space-saving deep soaking baths tend to hold on to their heat much more effectively. In Cabuchon deep soaking tubs, this effect is further enhanced because the baths are made from FICORE®, our own proprietary composite, which retains heat six times longer than acrylic and more than twelve times longer than vitreous enamelled metal.

This ability to retain heat is important because one of the key mechanisms by which true hydrotherapy systems achieve their therapeutic effects is by warming the muscles. A tub that quickly grows cold will not work efficiently as a hydrotherapy bath – either that, or it will have to be refilled with hot water, which means wasting both water and energy.

Deep soaking baths therefore have a natural advantage when it comes to hydrotherapy but Cabuchon saw that this could be further improved by the use of an in-line water heater. By reheating the already-warm water as it is drawn through the intake and out of the hydrotherapy jets, such a system could maintain the optimum therapeutic temperature without any need to refill or top-up. Gentle reheating is clearly more energy efficient than heating new water from cold in a property’s boiler. The in-line approach therefore saves considerable power and a certain amount of water. It also makes for a more relaxed, enjoyable and uninterrupted experience, since the bather does not need to stop to periodically top up the water.

Through refinements such as these, Cabuchon has pioneered the development of deep soaking baths and has created some of the world’s very best hydrotherapy systems. The two product groups have developed in parallel over the years and, joined together, they deliver the last word in luxury bathing.

Guide to Choosing a Hydrotherapy Bath.